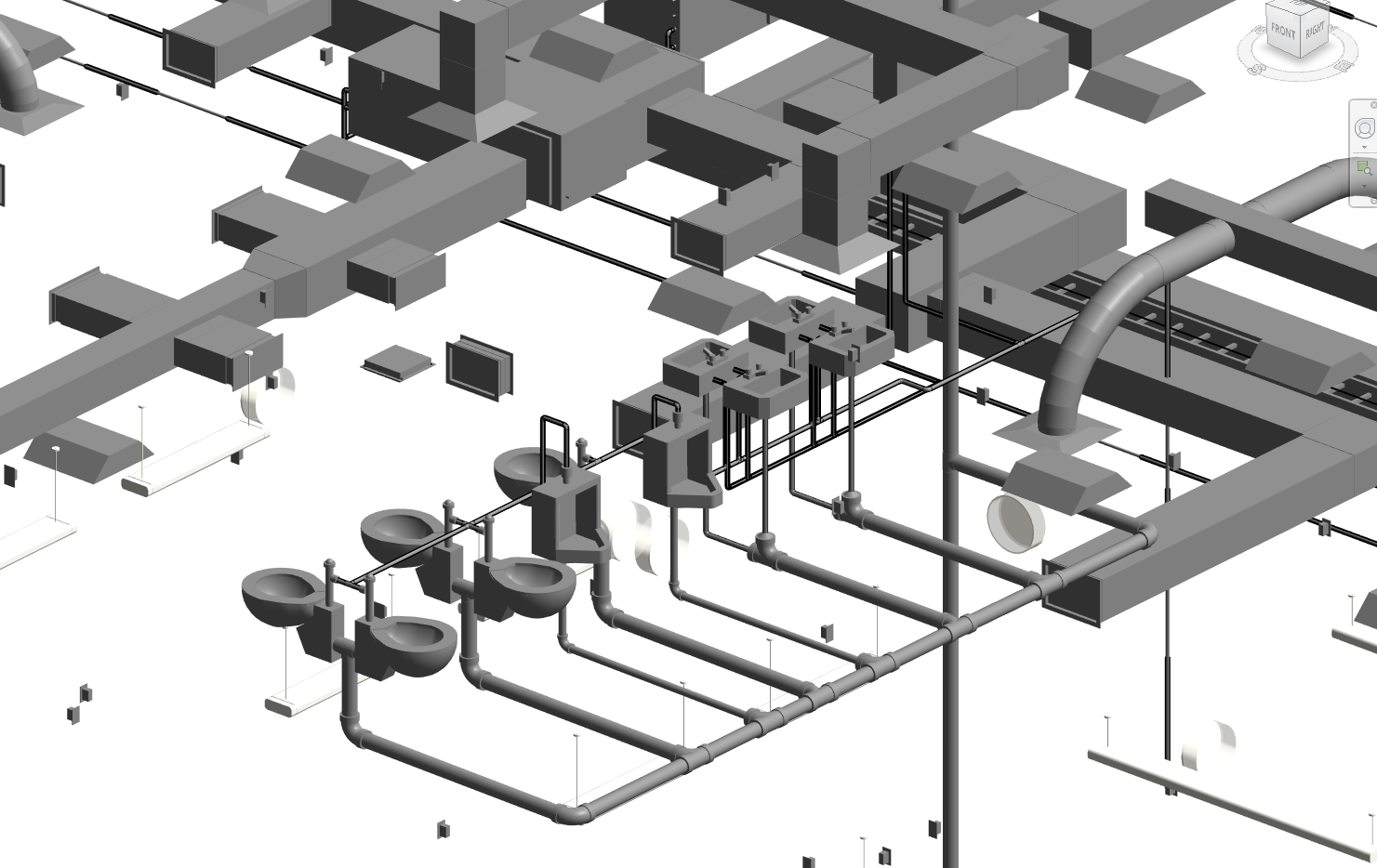 One feature of Revit that remains particularly controversial after all these years is the implementation of Revit worksets. Over the 15 years that I’ve been using Revit, this topic seems to have the least consensus amongst BIM managers who strive for solid standards.

When first attempting to identify what the “correct” way to use Revit worksets might be, I would recommend to understand the functionality that Revit worksets provide.

Worksets Are Designed for Permissions Control

If you’ve ever been tasked with collaborating on a single Revit with multiple team members (I’m sure most Revit users have), you understand the challenges associated with worksharing. I won’t dive into all of the complexities of worksharing in Revit, however let’s at least try to understand that worksets were implemented to alleviate some of that pain. With all of that being said, one could consider Revit worksets as a way to help assign ownership of elements within a model.

Borrowing elements is a technique that works fairly well for most situations, however it can become particularly cumbersome when team members are working in the same area of a model. Walk through an engineering firm at 4pm on a Friday night when a 100%CD set of drawings are due by the end of day and you’ll hear designers yelling over cubicle walls at their coworkers to sync to central. This is due to the borrowing method, where users don’t check out an entire workset, but rather borrow elements. They’ll maintain ownership until the next time they sync, at which point the ownership of those borrowed elements are relinquished. Once the sync is complete, any other team member can now borrow them as needed and continue the cycle.

The way to avoid the somewhat irritating nature of this workflow is to create a Revit workset and assign model elements to it. This allows any member of your team to make a Revit workset editable, which in other words means they are claiming ownership of all of the elements on that workset. This prevents users from being able to borrow and edit those elements until the user who has the workset checked out explicitly chooses to check it back in, thus allowing other users to either borrow elements from that workset or even make the Revit workset editable for themselves.

In addition to controlling ownership of elements, making Revit worksets editable has a major performance advantage. When making a workset editable, Revit no longer has to check for ownership of every element that a user is attempting to modify. This means less work for Revit (which is always a good thing). This is particularly helpful for large models with several users and in my personal experience I’ve seen massive speed increases when connecting MEP systems in a model when the workset that they live on is editable.

In contrast, borrowing elements on the fly means that Revit will have to check if the element is being edited by another user before claiming ownership. Again, more work for Revit and your network connection, means decreased model efficiency.

Closing Revit worksets can also give you a boost in performance on a local level. By closing entire worksets, you are essentially temporarily removing the model elements from the model (for lack of a better term). Keep in mind that you are not simply hiding them or turning off their visibility. Revit actually somewhat ignores those model elements when the workset is closed which means less RAM will be required to work in the model with less worksets open.

It is common practice to load linked Revit models into their own worksets. There are several benefits to this workflow, one is having the ability to not load links at the time of opening the host model. This can help you decrease the time it takes to open a model or even prevent Revit from crashing due to a corrupt model being loaded through a link. 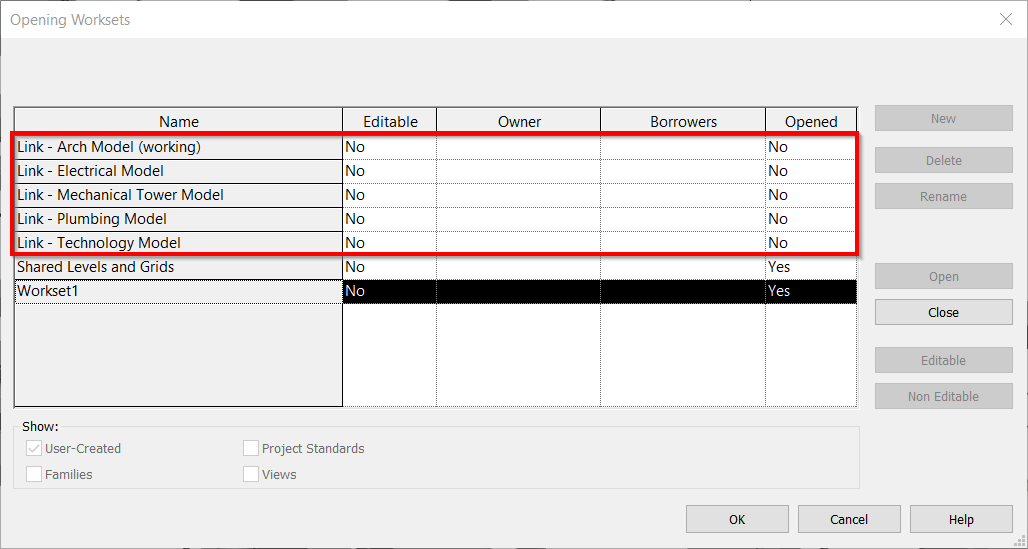 Although worksets were designed for permissions, I’ll often see them being used incorrectly. I think the biggest issue that I’ve seen is using worksets as if they were AutoCAD layers.

I remember one design assist project where I was the model manager on the design firm side. The mechanical contractor was leading the BIM effort, which means we were required to adhere to their standards. I was shocked to see that their BIM execution plan had laid out over 200 worksets required for their models, many of which seemed to mirror their CAD standards for layers. In all honesty, if you have a standard to create a workset per model category, I’m afraid that you have missed the point of Revit worksets completely. I might even question your understanding of Revit model categories and V/G overrides in general.

V/G Overrides Should Not Rely on Worksets

Yes, Revit makes it possible for you to control how a workset is displayed in a view. Because of this, many users will create worksets with the sole purpose of overriding the visibility of elements in a view. This is very common among folks who have a strong AutoCAD background, as they are accustomed to being able to control the appearance of an object based on the layer it lives on.

I think it goes without saying that Revit does not have layers and there really is no need for this type of workflow in BIM. We have data as an alternative and we should be leveraging that data.

If using worksets to control visibility of elements is a standard practice at your firm, I would challenge you to try to use parameter data to control your visibility/graphic overrides instead. By using parameter values for your graphic overrides, you’ll require your users to input data into parameters rather than forcing them to model on correct worksets, which can help mitigate human error.

It truly is a shift in mindset to use parameter data to control the visibility of an element, however I would encourage all Revit users to become comfortable with applying view filters whenever possible. 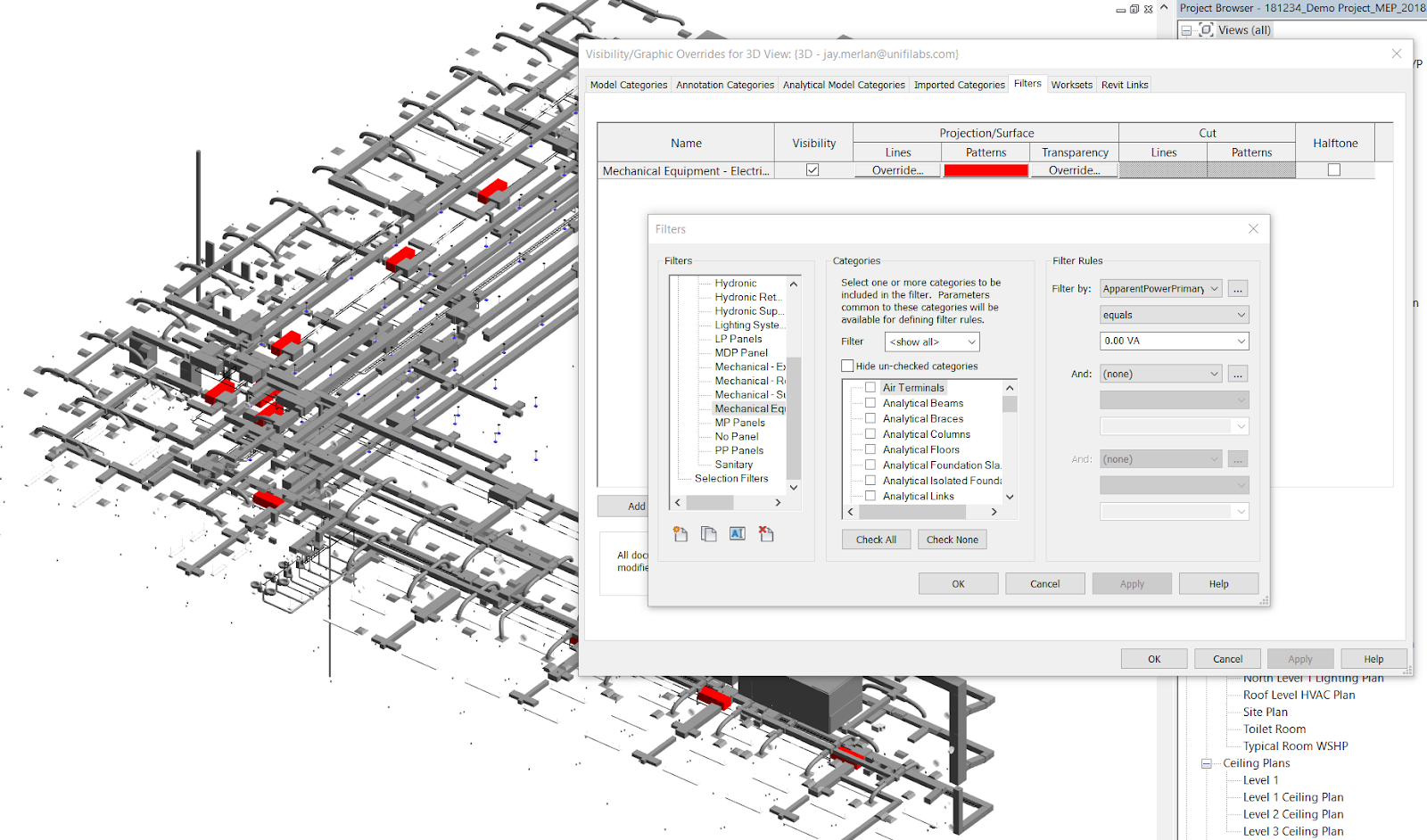 The image above is an example of using filters that rely on parameter data, not worksets. If the parameter data already exists, why would you want to take an extra step and force your team to put elements on a specific workset simply for a graphical setting? In the filter above, you can see that my if my apparent power is equal to 0VA, the element will be colored red. This is just one example of how filters can reference parameter data. With the power of view filters, you can take a step back and identify why you need to override the graphics of an element and which parameter you can use for this (as opposed going the easy route and creating a Revit workset).

In addition, information is always changing in models, so setting up your views to rely on parameter data means your filters will always be as accurate as your model data. In contrast, requiring elements to live on the proper workset opens up the possibility of users modeling elements on the wrong Revit workset. Think about back in the AutoCAD days, how often did you see objects drawn on the wrong layer? 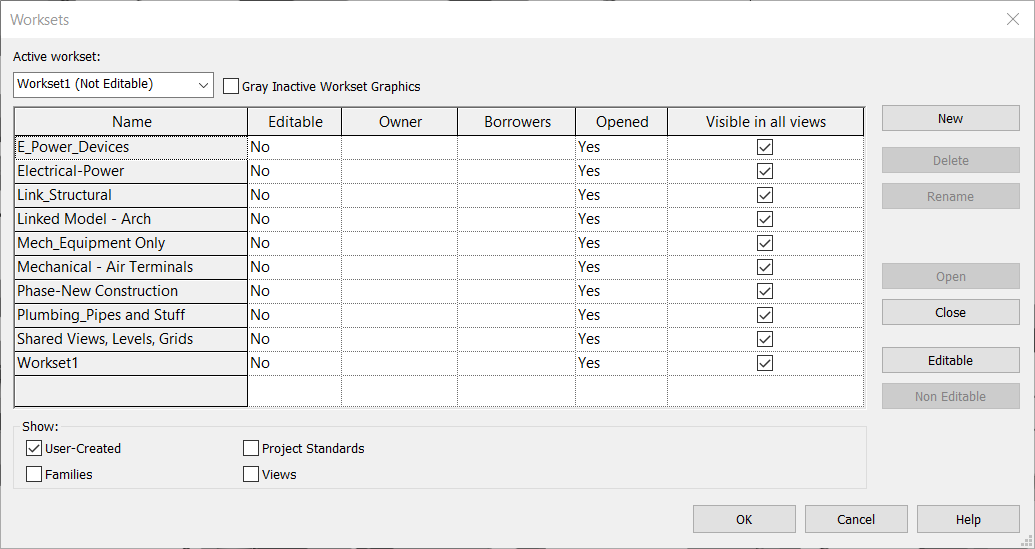 Implementing a standard practice for Revit worksets can be challenging without the right tools. How would a model manager keep an eye on the worksets in the many models that they’re in charge of maintaining? Furthermore, how can they identify when a team member creates a workset that is implemented incorrectly?

Luckily, we have a couple of features in Project Analytics that can help you maintain control over those worksets. Keep in mind that this information is updated any time a user syncs to central, so you can be sure that you’re always seeing the most live up-to-date worksets within these models. 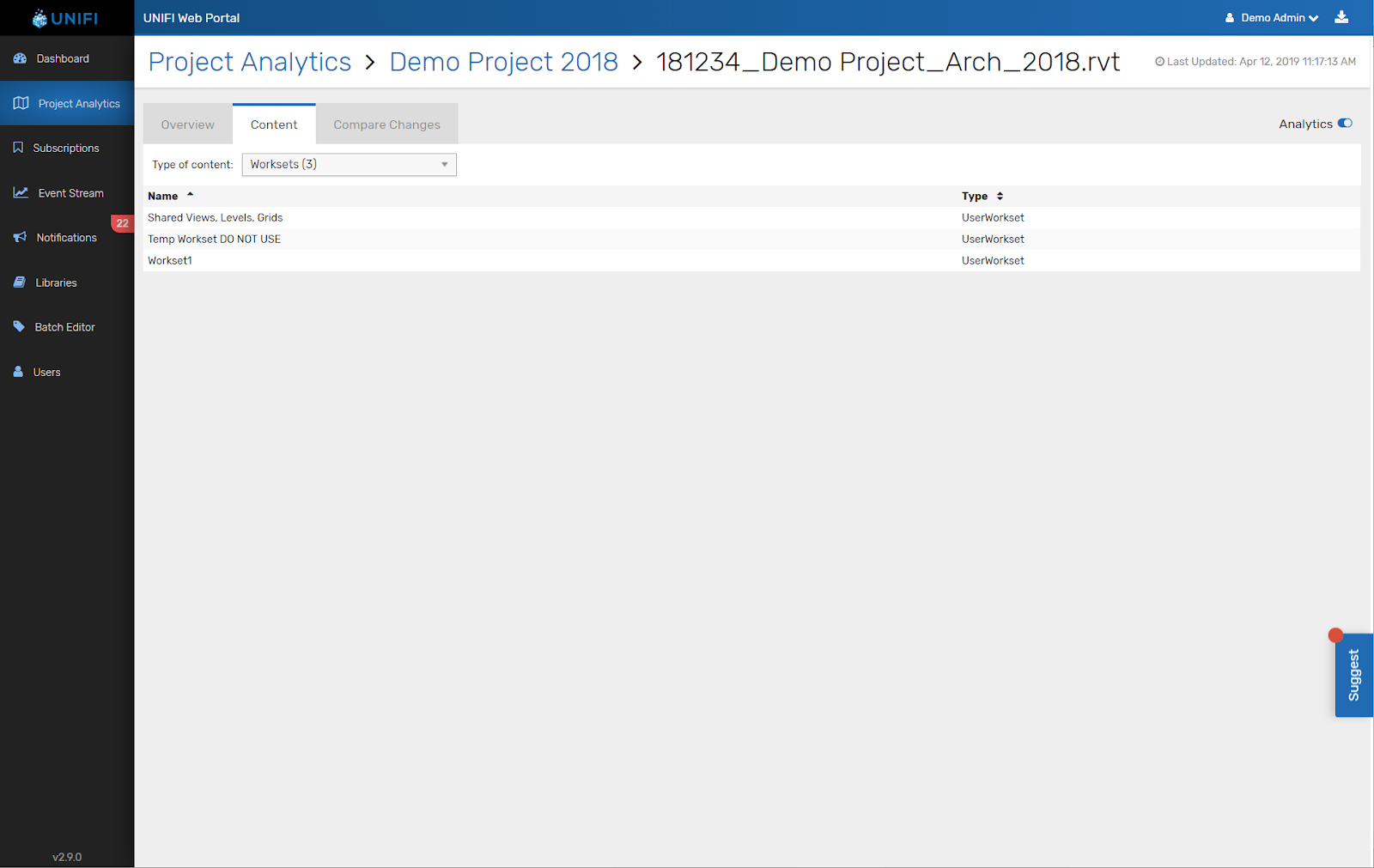 While browsing through the contents of a model, Project Analytics surfaces content types other than Revit families. With this tool, model managers can quickly review the worksets that are defined in every model throughout their organization. You’ll no longer need to open a model simply to review the worksets because these are now visible directly from your web browser.

In the screenshot below, I can now review the changes made to the model when Jay Merlan synced at 2:00:01PM on April 13, 2019. It looks like he’s made one change, which was deleting a workset. 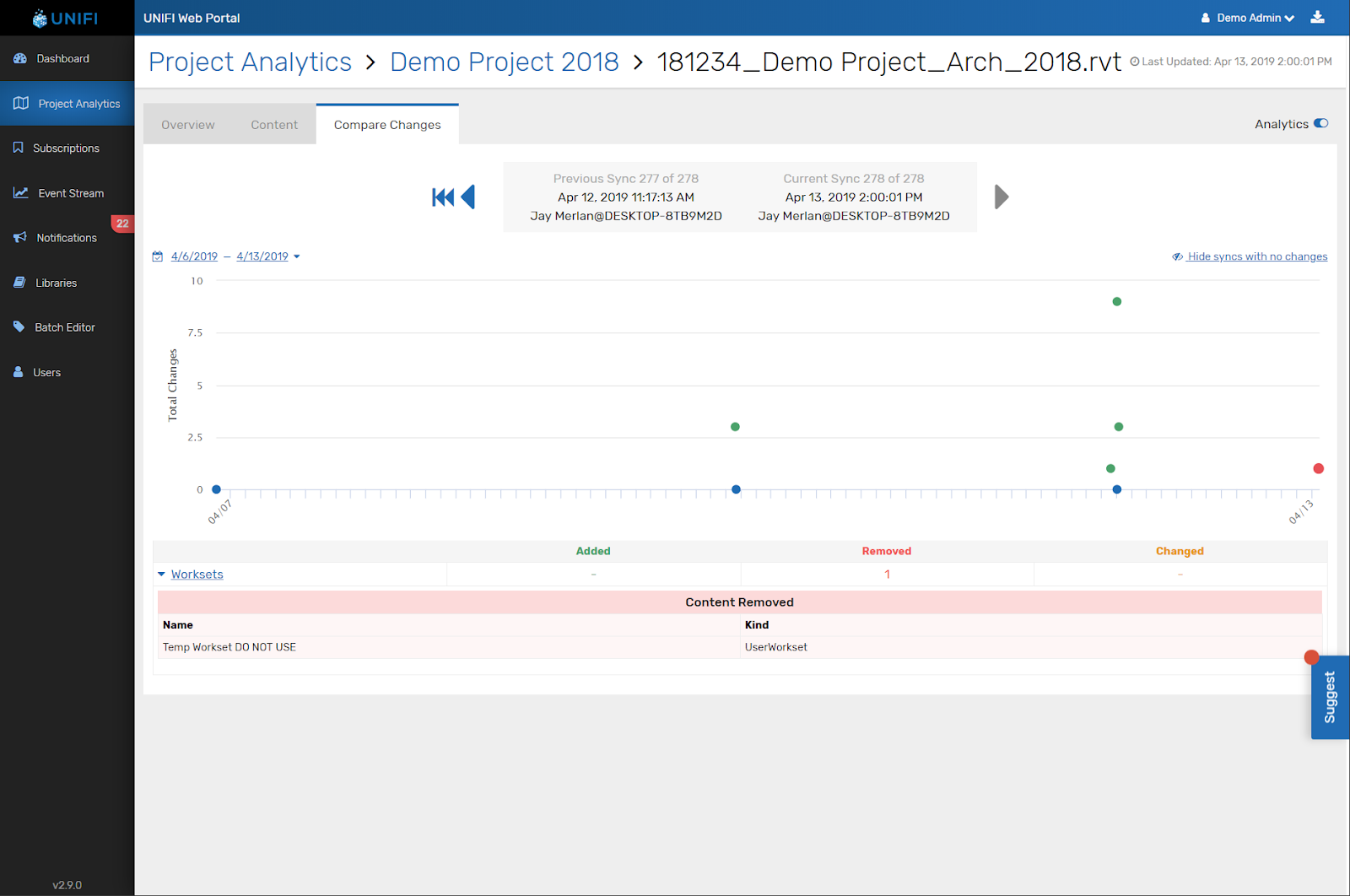 You can imagine how helpful this information can be when you either see worksets disappearing from your models or rogue worksets appearing that don’t follow your standards.

Below is a screenshot of another sync and I can see that Jay added eight worksets, mostly worksets that my BIM manager would disagree with.

Can Project Analytics be used as a tool to identify areas where your team requires additional training? With this tool, you’ll be granted the ability to see who made changes to the worksets within your model meaning you can identify who is following protocol and who isn’t.

How Do You Use Revit Worksets?

I hope that this article has been helpful in understanding my views on properly implementing Revit worksets. Again, I propose to only use Revit worksets to properly share work and increase efficiency. As I mentioned earlier, there are many ways to use worksets (whether correct or not) and Project Analytics will continue to build features which help model managers keep an eye on their BIM standards.

How do you use Revit worksets? Do you agree with these views? Leave us a comment below so that we can learn more about your standards and why you implement Revit worksets that way that you do.

Please Fill Out the Following Form to Subscribe to Our Blog:

Don’t worry, your email is safe with us!