If you’re not familiar, Rhino 3D is a free-form surface modeler which uses the NURBS mathematical model to generate geometry. This makes Rhino one of the leading CAD tools for conceptual design in the AEC space as it provides an intuitive interface for creating geometry quickly and easily. 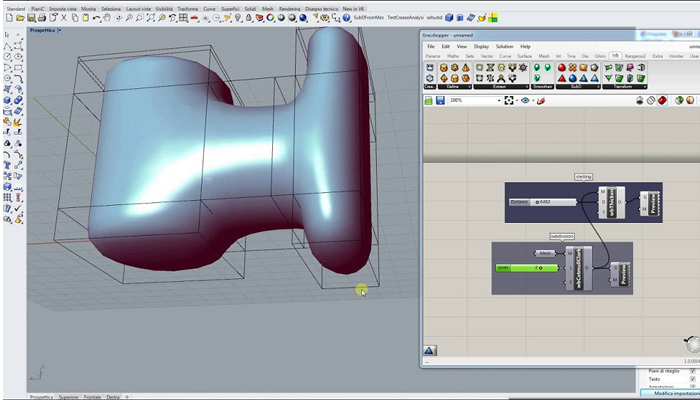 Although Rhino is popular amongst architectural designers for conceptual design, the leading authoring tool for construction documents is still Autodesk Revit.

In this post we will cover how to bridge these two tools to help you get your models from Rhino to Revit.

Many design firms juggle multiple design authoring tools as part of their daily workflows, but the question always remains, “how do I get these different tools to talk to each other?” In other words, what is the best way to get a model from Rhino to Revit?

The good news is, these applications are compatible to some extent and there are two main ways to port your models from Rhino to Revit.

Method 1: Import the Rhino Model to a Revit Family

The most common technique to import Rhino to Revit is to import the .SAT Rhino file directly into a Revit family of the “Mass” model category. Once imported into the family, the family can then be loaded into a Revit project as usual.

Conversely, you also go from Revit to Rhino with a similar export/import process.

This process is fairly straightforward, but if you are looking for a solid step-by-step guide is available from BIMtopia, Transferring Models – Rhino to Revit to Rhino.

One of the latest work in progress (WIP) projects for Rhino is the Rhino.Inside initiative which allows users to run Rhino and Grasshopper “within” other applications. This means unprecedented free-form modeling tools are now available in Autodesk’s leading CAD and BIM applications. In addition to the new tools exposed to Revit, this new approach to interoperability also means a more simplified Rhino to Revit workflow.

For more information about this progressive initiative and a full how-to guide on how to implement, check out Rhino.Inside.Revit.

Rhino to Revit or Rhino.Inside.Revit?

Either of the two methods above will help with getting 3D models from Rhino to Revit, but which path should you take?

Put simply, if you need a quick way of getting geometry from Rhino to Revit or perhaps you only just need to do this once, simply import it into a family (method #1). If you are looking for true interoperability between the multiple authoring tools, you most definitely want to go with Rhino.Inside.Revit (method #2).

Although it is a bit more upfront setup,  Rhino.Inside.Revit enables entirely new possibilities for Rhino to Revit workflows. So if Rhino and Revit are integral pieces in your tech stack, try out this new way of connecting Rhino to Revit.

Revit Add-Ins Are Where It’s At

Like Rhino to Revit, UNIFI also helps users save hundreds of hours annually by maximizing efficiency in Revit. Visit us here to learn more.